TBILISI, June 18, 2017—The Senior European Fencing Championships have finished in Tbilisi, Georgia, after completing 12 events including men’s and women’s team and individual competition in foil, sabre, and epee. The event, which took place at the New Tbilisi Gymnastic Arena, drew broad participation from country teams and more than 400 individual fencers from throughout the European continent. Italy took the most gold medals (four) throughout the Championships, followed by Russia and France.

Individual Competition. In epee, Russian women’s epeeist Violetta Kolobova, currently ranked fourth in the world, took the Zonal title for the second time in her career. She overtook Germany’s Alexandra Ndolo, 15-10, in the final match. Kolobova beat top-ranked Olympic gold medalist Emese Szasz-Kovacs 15-13 in the semi-final, and Ndolo defeated World Champion Estonian Julia Beljajeva, 15-12, to make the final. For the men, France’s Yannick Borel, ranked first in the world, took the gold for the second year in a row, defeating World Champion Paolo Pizzo of Italy, 15-10. Borel took out two-time World Champion Nikolai Novosjolov of Estonia in the semi-final, as well, 15-10.

For sabre, and to the delight of the Georgian audience, a local athlete took top honors, with Georgia’s Teodora Kakhiani winning 15-8 over Italy’s Rosella Gregorio. Kakhiani beat Hungarian Liza Pusztai, 15-12, in the semi-final. For the men, Germany took the gold medal with World Championship bronze medallist Max Hartung beating two-time Olympic gold medallist Aron Szilagyi of Hungary in the final, 15-7. In a spirited match but disappointing result for the Georgian audience, Hartung took out Georgian Sandro Bazadze, 15-11, in the semi-final. 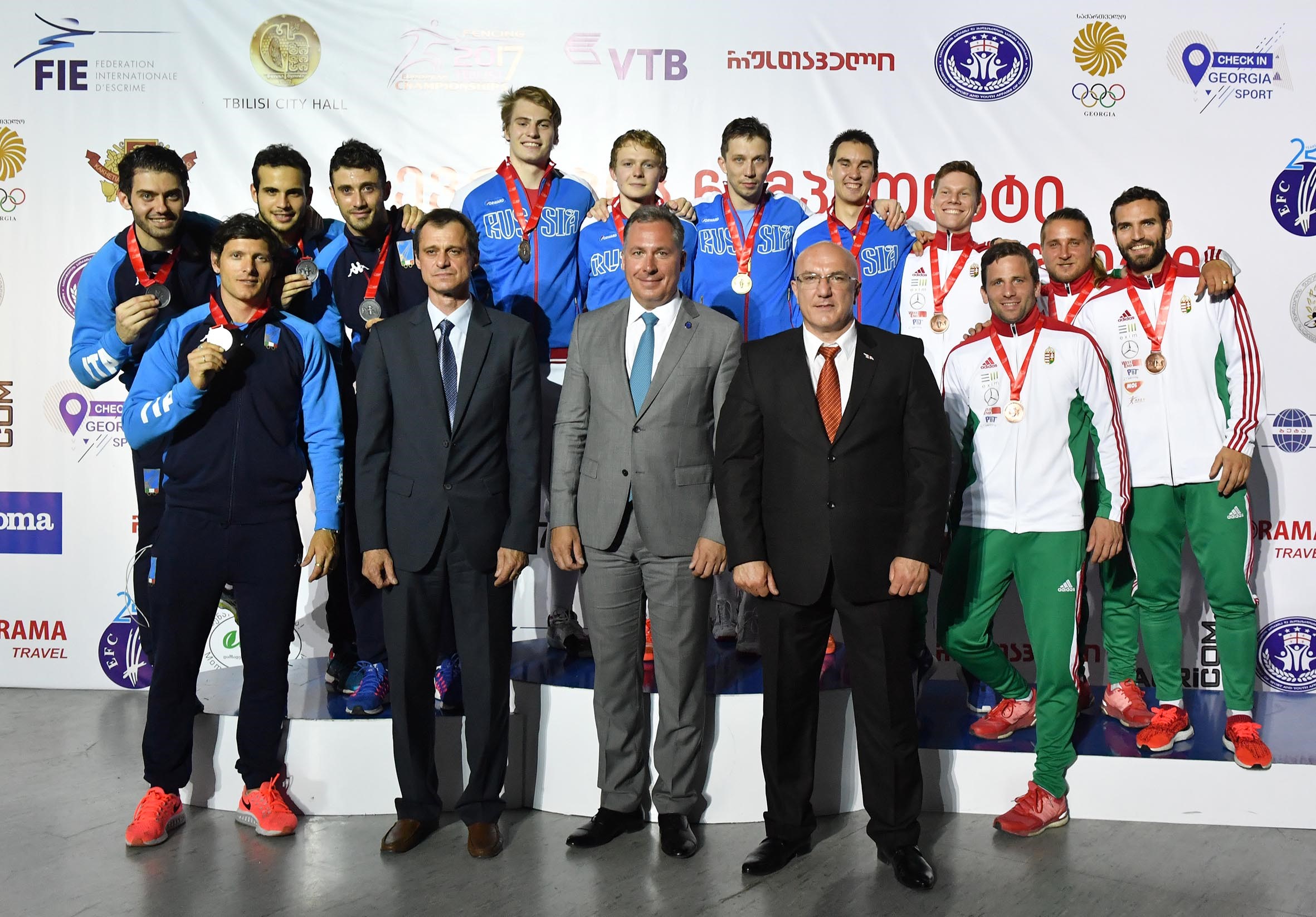 Team Competition. For the epee team competitions, the French women’s team prevailed by a single point over Russia, 42-41, for the gold medal. In the semi-final, France took-out Estonia, 45-30, while Russia beat Romania, 45-41. Romania took bronze over Estonia, 45-38. In men’s team epee, it was another single-point win with Russia beating Ukraine, 33-32. Russia beat Germany in the semi-final, 45-30, and Ukraine defeated Czech Republic in a low-scoring semi-final match, 18-14. Similarly, in the bronze match, Czech Republic beat Germany, 23-22.

In foil, the Italian women’s team had a strong win against Russia for the gold medal, 45-31. The Italians beat Germany in the semi-final, 45-36, while Russia beat Hungary, 45-27. In the bronze match, Germany was victorious over Hungary by a wide margin, 45-18. In the men’s team foil event, France closely beat Russia, 45-43, in a tight match for gold. The French beat the Germans in the semi-final, 45-26, while Russia overcame Italy, 45-40. Italy earned the bronze against Germany, 45-40.

In sabre, it was again a tight match, with the Italian women’s team beating Russia by a touch, 45-44, for the gold. Russia beat Hungary in the semi-final, 45-25, and Italy had defeated France, 45-39, in the same round. France took home the bronze medal against Hungary, 45-37. In men’s sabre, it was the reverse of the women’s results, with Russia winning over Italy, 45-41, for the gold medal. The Italians had beaten Germany, 45-39, in the semi-final, with Russia beating Hungary with the same score. Hungary took bronze over Germany, 45-28.

Final results and details may be found on the FIE Web site, here, and the official Web site for the European Senior Fencing Championships may be found here.