EFC “Get Ready for the New Season” Online Refereeing Seminars

During the months of September and October, the European Fencing Confederation (EFC) accomplished a series of seminars appropriately named “Get Ready for the New Season” and aimed at the newly appointed category C sabre referees.

EFC is utilizing the “downtime” to best prepare new referees for when competitive fencing resumes. Furthermore, the seminars are aimed at preparing the delegates for their FIE refereeing exams.

The seminars covered both theory and practice and the sessions were led by EFC Secretary General Jacek Slupski and Vice-President Nikolay Mateev. They were supported by two members of the EFC Referee’s Commission who are both active international referees, Vasil Milenchev and Vladislav Shamis.

During the first seminar, the referees were taken through a theoretical quiz before discussing videos of actions from the most recent international tournaments, and were given practical examples of how to behave in difficult situations during major international competitions such European and World Championships.

The referees were provided practical examples of real-match situations. By challenging the trainees with these situations, Milenchev added, “We have test questions that specifically challenge their knowledge of the technical rules. The idea here is to show that rules are the most important part of referring. Usually when you make a mistake this can push you to read the rules to ensure that you don’t make the same mistake again - this is the biggest step forward”.

After completing the seminar, one referee commented, “I’ve not had the opportunity to practice my refereeing for some months now and these seminars allow us to continue practicing safely in these strange times. Thanks to the EFC for setting them up and to both referees for their time and insight. I can’t wait for the next one”.

On how the seminar series was progressing, Jacek Slupski concluded, “We are pleased that this idea is developing. Referees are getting more and more involved. In addition to the rules and video analysis, mentors were teaching self-confidence, appropriate behavior during refereeing and the right approach in difficult and unexpected situations during competitions. I am convinced that such initiatives will positively influence skill development in sabre”.

Summing up, Vice-President Mateev pointed out, “Our joint goal with the support of national federations is to increase the level of European refereeing, improve the organization of both Junior and Senior World Cups and put forward the best-qualified European referees for the FIE exams. It was a promising start and I look forward to continued success. Particular thanks go to Vasil and Vladislav for volunteering their time”. 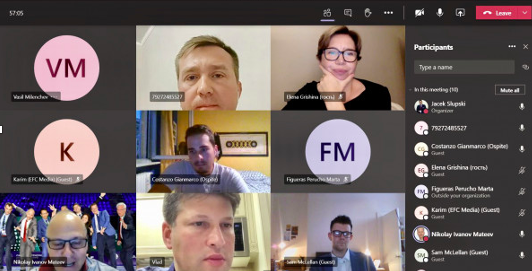