Romania swept Hungary aside 27-19 for the bronze. 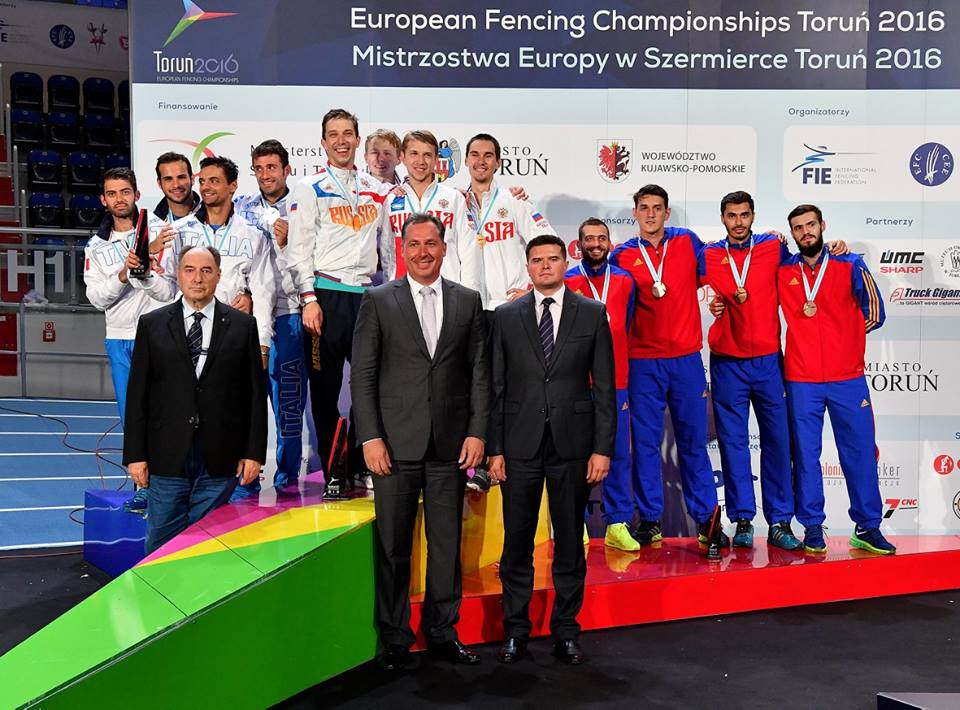 In the men’s sabre, Russia won the last gold of the championships with a 45-42 win over Italy.

World No. 1 Alexey Yakimenko anchored the Russians to victory, wit Dmitriy Danilenko, Kamil Ibragimov and Nikolay Kovalev the other members of the team.

As in the women’s epee, Romania beat Hungary for the bronze, this time by 45 touches to 32.

France and Russia were the gold medal winners on Friday, prevailing in the men’s team epee and women’s team foil, respectively.

The French, anchored by world No. 1 Gauthier Grumier, beat Italy 45-40 for team epee gold. It was a second title at the championships for Yannick Borel, who beat Max Heinzer of Germany to win the individual event on Tuesday. The other members of the victorious French team were Daniel Jérent and Jean-Michel Lucenay.

The bronze went to Ukraine, who beat Switzerland 45-31 in the third-place playoff.

In the women’s team foil, the Russian quartet of Inna Deriglazova, Larisa Korobeynikova, Aida Shanaeva, Adelina Zagidullina triumphed over Italy by a score of 45-38. That result denied Italy’s Arianna Errigo, the world No. 1 who won the individual title earlier in the week, a second gold.

France beat Hungary 45-30 for the bronze.

Russia also triumphed in the first two team events of the championships on Thursday, collecting gold in the men’s foil and women’s sabre.

Ukraine claimed the bronze with a 45-42 win over Poland.

On Monday, the first day of the championships, Velikaya and Timur Safin won European gold. Velikaya beat Hungary’s Anna Marton 15-7 in the final of the women’s sabre.

Along with the Pan American Championships held concurrently in Panama this week, the Europeans are the last major competition on the FIE calendar ahead of the Olympic Games in Rio de Janeiro.